Here you need to remember two things. The first thing is that when you connect two devices via Bluetooth, the improvements and technologies of the device with a lower version are used. Thus, by connecting a Bluetooth 5.3 mobile to a Bluetooth 5.2 speaker, you only have the improvements of 5.2. In addition, each new version integrates the improvements of the previous onesso you won’t have to choose between one and the other, just look for the most modern version on your future devices.

Evolution of Bluetooth version by version

We will start with a list in which we will teach you all the versions that the Bluetooth protocol has had and its main novelties. In this way, you will not only be able to see the different versions and their release dates, but you will also be able to evaluate the importance of the novelties of each version having the context of how much each of them has innovated.

Bluetooth is still the reference wireless communication protocol between devices, which makes it possible to connect computers, smartphones, tablets, and various types of connected devices such as watches, keyboards, mice, speakers. All of this without the need to use cables to connect themand using a secure radio frequency in the 2.4 GHz ISM band.

Bluetooth 5.3 compared to its predecessors

You could say that Bluetooth 5.0 is the basis of the new version family of this protocol. This is the latest major update that has revolutionized Bluetooth 4, doubling the speed of file transfers and quadrupling the range, which is how far they can transfer data between each other. Since then, the other versions have only perfected small things.

Bluetooth 5.1 it focuses on device location, letting them know the location of other devices it is connected to and identify the direction its signal is coming from. Meanwhile, ** Bluetooth 5.2 focuses on soundimproving the sound quality and energy efficiency of all devices that connect for audio functions.

Bluetooth 5.3 is also another small step for this family of Bluetooth 5 updates, in this case focused on further improve energy efficiency, and make the connections have less interference. Moreover, he hears offer a higher level of security and better quality at all times, depending on the bandwidth required.

To improve performance by reducing power consumption, this release added a filter for periodic advertising process updates. This makes shipments Redundant data is removedand therefore save the small peak of energy consumption necessary for their delivery 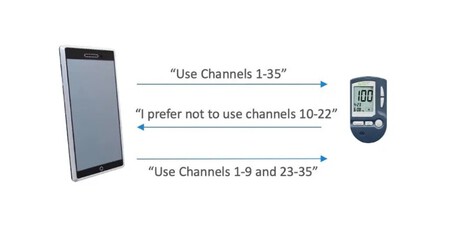 In addition to this, devices can give their list of favorite channels for the device connecting to it to take them into account and use them above others. A) Yes, performance is improved and connection interference will be reducedsince the channels are not decided by a single device such as the mobile, but they can be said to come to an agreement to use the paths that work best for both.

For security reasons, the control of the size of the encryption key is increased. This means that now the driver can set a minimum size for the key, and if you are going to connect to a device that is not very secure due to using too short an encryption key, the connection will not be not established to protect you. In this way, consumption is also reduced, since the device only “looks” at those who meet the requirements when it comes to offering to connect to it.

Finally, Bluetooth 5.3 allows your devices andsand modes with higher bandwidth if needed, and with minimal delay. This means that if we use Bluetooth in a way that suddenly requires more bandwidth, like switching from listening to music to calling, that transition will be more efficient.

There is also a function IntelligentDualBluetooth which allows simultaneous connections to be established, both in its normal state and in BLE. This is quite an important novelty, as it will allow, for example, connect two mobiles to a single speaker via Bluetoothas long as all three devices are running 5.3.

Therefore, we can say that this release focuses on consumer and privacy polish, and all of this internally, so you won’t need to change the configuration or anything. However, it also includes the new Smart Dual Bluetooth featurewhich can offer you an interesting new feature.

Here, what you need to know is that each new standard also offers improvements from previous versions. This means that when buying a device you won’t have to choose between 5.2 sound or 5.3 improvements, just try to make your Bluetooth version the highest as it will include all new features that previous versions implemented. .